Back to All Content
The Good Things on Crop Tour

I celebrated a birthday recently.

Getting older does get old, but the good things that happen along the way never do.

Driving across the western corn belt, walking farmers’ fields and collecting and scoring data for predicting the national corn and soybean yield was a terrific experience.

Here’s what I learned… and what I think is important for you to know about the Crop Tour.

Here are the Results

I was surprised. We found the corn crop to be better than most of us expected. It’s not great nor is it even a lot better than expected.

But it is better indeed. USDA pegged the corn crop at 169.5 in August, and Pro Farmer issued a 167.1 bpa national yield estimate.

In the soybean fields, my conclusions were different. I wouldn’t have been surprised to find record yield potential again this year. However, pod counts were noticeably down in every state versus a year ago except in Illinois where they were steady.

Last year, the national average was a record shattering 52.1.

As I drove west, it became apparent that a lot of beans have been planted.

I can’t disagree with Pro Farmer’s decision to raise soybean acres by 500,000 from the USDA in August.

The estimates published by Pro Farmer for total corn and bean production are 13.953 and 4.331 billion bushels.

All in all, these production levels don’t do much to the balance sheets.

Certainly, they don’t do anything to shrink the ballooning US stocks.

Given the two (though short-lived) opportunities to sell corn at plus $4.00 levels, you may feel that you’ve “stepped in it” regarding pricing new crop corn. Certainly, I wish now I’d priced more myself.

On Twitter and in chat rooms, guys are debating the tour results. I would have a harder time accepting them too if I hadn’t seen the crops in the western belt for myself.

Still, I think Pro Farmer could be a couple of bushels high in corn and maybe a bushel or two on beans as well (still within their range of guesses).

Corn needs a bigger hit to production than that to positively impact prices. But another bushel or so lower in soybeans would generate buying interest.

Harvest is around the corner. On my farms, we will wait now until production is known before making additional sales.

We’ll watch for early season basis gains—which could be sharp—if the combines prove the tour and USDA numbers to be wrong.

Farmers will be putting a lot of crops in their bins unpriced. On our farms, we’ll do the same. But we’ll make those bushels work for us.

I want to be proactive. I want buyers to know that my crop exists and I want them to know a price where I’d like to move it. Because there is no cost to register and post at Farmlead.com.

There is simply no downside to doing so.

The good things that happen

The almost 80-member scout team on the Western Leg met in Sioux Falls the Sunday night before the first day of the tour.

I met dozens of farmers—good folk. Other scouts were from ag tech companies, media peeps, hedge fund participants and market analysts. I was pleasantly surprised to find buyers, analysts, and traders from nine different foreign countries.

Many of these guys had never been in a corn or bean field. Most had never traveled in any land like the rolling fields and small towns of the western corn belt.

In a matter of just four days, they developed an appreciation for the hard work and risk that farmers take.

The eyes of the fellows from Taiwan and China got wide when we left the pickups unlocked while eating at a diner for lunch.

Jorge was a 24-year old corn buyer from Mexico. He moved his flight back to stay and visit Rochester, MN for a couple of days. He was blown away by the people he met on tour, including the farmers he talked to at the nightly meetings.

He told me he will always think differently about the corn he buys—he’ll be thinking of the people he met who grow it.

Agriculture in the Midwest is personal now to the nearly 20 different foreign market participants who met farmers, scouted their fields and for those four days walked in their shoes.

They feel a kinship to the important work that we do in our fields, our livestock barns and in our pastures every day.

I can’t help but think of the good that the tour has done in this regard over the last 25 years. Mostly, I’m grateful to have met those people new to our land and to have left them “in-love” with our country.

The good things that happen to us never get old.

Doug Kirk is a Central Illinois Farmer; he is a FarmLead PowerUser and grain market enthusiast. He welcomes your feedback and conversation.

Reach him in the FarmLead Chicago Marketplace at 312-459-6149, email to d.kirk@farmlead.com or on Twitter at @iplow1. On August 29, 30 and 31st, members of the FarmLead team are in Decatur, Illinois at the Farm Progress Show. They hope you’ll stop and say hello. 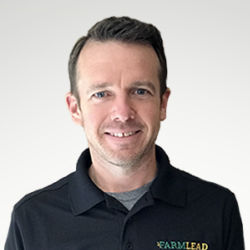